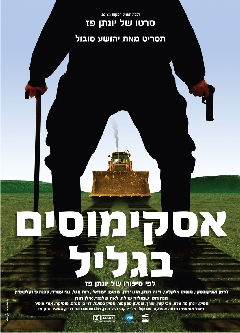 An old kibbutz isolated in the Hills of Galilee finds itself immersed in deep debt and is threatened by lawsuits from bankers and creditors to the point of bankruptcy. On the evening prior to the arrival of the bailiffs, the great exodus begins. Men, women and children abandon their homes, taking with them all their possessions. The sun rises over an abandoned and desolate kibbutz. No living soul can be seen. Twelve senior citizens awake in the kibbutz old-people’s home to discover they have been deserted and left to fend for themselves.. The bank, the largest creditor, closes a deal with a contractor who arrives at the kibbutz and is astonished to discover the old-timers left behind. The group initially sink into deep depression, but later begin to organize an effective communal unit. They begin to rebuild the kibbutz. The Galilee Eskimos is a movie about the latent power revealed when senior citizens are abandoned and betrayed by society and their relatives, who leave them alone to their determine their own fate.