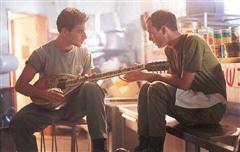 Voices from the Heartland: Buchachi

Buchachi, a cook at an airforce base, humbly accepts the military hierarchy that places the pilots at the top of the pyramid. Against the background of a fierce sing-out between the cooks and the pilots during Independence Day celebrations at the base, a new soldier arrives who casts new light on the cooks’ status. Buchachi, for the first time in his life, fights for his values.
Lod Airbase, 1990. Buchachi and I would clean the base together, every few weeks, each time that I had duty or that I was punished and sent to do menial jobs. He lives with his father in a shabby apartment at the Central Bus Station in Tel Aviv, while I was born with a silver spoon in my mouth in Ramat Hasharon. We went through many ceremonies together, parades. He would arrange the chairs, hang the flags, sweep and clean. During the ceremony, I would take pointless pictures of the pointless military event. And he stands at the end of the parade ground, his uniform filthy from the day’s work, not from the dust of battle, ashamed. Buchachi came about because I had a feeling that it was very clear to our society what is central and what is peripheral, who is deserving and who isn’t. The choice of Buchachi as the hero of the drama came in order to question, if only a bit, these obvious facts.” (Nati Adler)