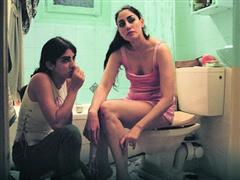 Or, a teenager who struggles to be responsible for her prostitute mother Ruthie, played by Ronit Elkabetz. Or’s responsibility at home gives way to an increasingly wilder side of her personality, pushed further by the mother of her boyfriend who tells Or that their sexual relationship isn’t suitable for her son. Ruthie, meanwhile, tries to hold down a poorly paid job as a cleaner and give up prostitution at her daughter’s urging, yet is unable to stay away from the streets.