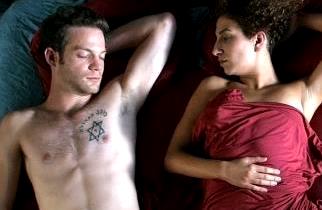 A daring hybrid of realism and fantasy, Forgiveness is a psychological thriller that explores the tragedies of the Middle East. David, a young American-Israeli, returns to Israel to join the army, only to find himself in a catatonic state after accidentally shooting a Palestinian girl while on patrol. He is committed to a mental institution which sits on the ruins of a Palestinian village. The head psychiatrist tries to cure him with medication, while another patient in the hospital, a Holocaust survivor, tries to redeem him by opening his heart to the ghost that haunts him. He returns to New York under his father’s care, believing that his horrific past is behind him until his love for a Palestinian woman brings his trauma back to the surface.

"The film's laudable attempts to encompass the far-reaching quagmire of Jewish tribal identity, politics and psychology could have a profound effect on the audiences who do find it."


"A metaphorical Israeli trauma sanctuary built over a massacred Palestinian village, and a raw yet mystical inquiry into the thin line between war and murder, and how combat multiples rather than eradicates enemies. Jewish guilt, Israeli style."