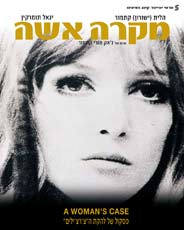 A woman has an affair with a man in a sculptor’s studio and is found dead.

A Woman’s Case, the only feature film directed by Jacques Katmor, a prominent member of the Tel Aviv artist collective Third Eye Group, is an avant-garde condemnation of the dehumanizing side effects of modern life.

It’s a simple story of a woman hooking up with an advertising executive and being found dead, the underlying theme of which seems to be a portrait of the times when materialism started to take off in popular culture and people, specifically models, being treated as disposable faces and bodies, without much individuality and with almost masochistic compliance to the society’s whims. The message thankfully isn’t preachy, and since Helit Katmor, the leading actress, is beyond beautiful, the movie is a really easy watch. She later became known for her translations of Proust into Hebrew while Jacques Katmor sadly became a tragic figure over time, sinking into alcohol and drug addiction.

The grainy B&W visuals are typical for the ’60s counter-culture aesthetic but still very lovely – melancholic and playful at the same time. There are many vignettes in this film set to excellent psychedelic rock (more precisely, the song “Open Up Your Eyes (Take a Look Around You)” by The Churchills, recorded for the film) and containing mostly of surreal imagery, dance scenes, depictions of women being bound or choked, as well as countless pop-art pictures, comic book panels, naked photos, all portraying the female body in one or another way. Naturally, the visual appeal of these erotic images is lost very quickly because of how numerous and repetitive they are, but that seems to be the point.

This is an excellent and criminally neglected art film, somewhat stylistically reminiscent of the Japanese New Wave films by Toshio Matsumoto and Susumu Hani, made in the exact same time as this one was. Highly recommended.

There’s also a funny little hourglass joke/anecdote towards the end of the film, which I’ll definitely be stealing.