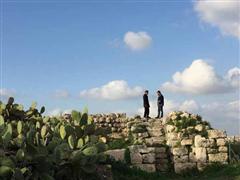 A Land Without Borders

Award-winning writer Nir Baram grew up in a political household. Both his father and grandfather were members of the Knesset and Israeli government ministers. As Baram begins to lose faith in the possibility of a two-state solution, he decides to travel throughout the West Bank to speak with both the Palestinians and the Israeli settlers living there. The surprising revelations force Baram to challenge his entire political belief system and reevaluate his own hopes for a peaceful resolution to this conflict.

Watch on other platforms:
Watch Q+A with director