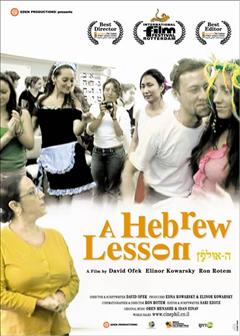 A Hebrew Lesson is a humorous, smart and exciting mosaic of a mixture of immigrants of various nationalities and their teacher. It is a film that gets under the skin of its participants as well as that of the audience. One of those whose characters won’t let you go even days after having seen it – and actually you don’t want them to leave. Chin left her daughter in China and came to Israel to make a living there. She cleaned Ehud’s house, and they fell in love. Sasha never considered immigrating to Israel. But four years after his wife left Russia with their daughter, he understood that life without his child would be worthless. He abandoned a thriving business, only to find himself in Tel Aviv’s worst neighborhood. Marisol grew up as a Jewish princess in Lima, Peru and came to Israel to learn something about life. An unplanned pregnancy alters her plans. These and other characters meet in a Hebrew language Ulpan, where their personal stories melt with the complexities of Israeli reality. The immense effort of learning a new language is revealed through their encounter with a strange culture and an unfamiliar environment. Israeli society is revealed through the foreigner’s eyes. This gaze – at times funny, at times sad – paints daily reality with irony. But beyond the obvious differences, the human common denominator of longing and love triumphs time and again.