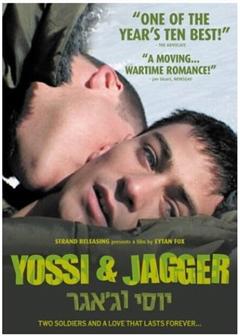 Yossi (Ohad Knoller) commands a company of soldiers in the snow-covered mountains near Lebanon. In secrecy, he leads a passionate romantic relationship with his second-in-command officer, Lior (Yehuda Levi), who is called Jagger by everyone for his rock star-like handsomeness. The pair, Yossi and Jagger, lead a loving, yet secret life together, venturing off to be alone and open with one another. One day, a colonel (Sharon Raginiano) arrives at the base with two female soldiers, one of whom he immediately sleeps with in the bunker. The other one, Yaeli (Aya Koren, credited as Aya Steinovitz), is very interested in Jagger, while she refuses the sexual advances of Ofir (Assi Cohen), who tries to make clear to her that Jagger is not particularly interested in her. The colonel is there to supervise a night-time ambush, of which Yossi is resentful because of the full moon, and also because he fears for his soldiers’ safety. And indeed Jagger is fatally injured that night, dying in the arms of his lover, who only now is able to articulate his love for him. At the funeral reception at Jagger’s parents’ house, Jagger’s mother mistakes Yaeli for his girlfriend. She laments that she knew very little about her son, including his favorite song, which only Yossi is able to tell her.