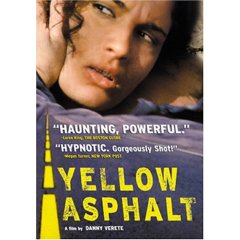 A film of forbidden and impossible love affairs, loyality and betrayal… “Yellow Asphalt” tells the story of three dramatic encounters between “East” and “West”. It is a story in which a western culture gradually pushes its way into the desert once the sole domain of the bedouin tribes and their ancient tradition. The film was shot entirely on location in the Judean desert with local actors and with the participation of the Jahalin tribe.