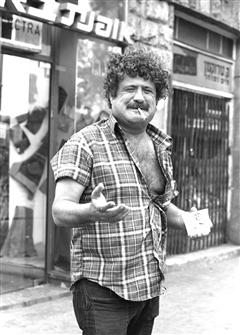 A ‘blue and white’ Troubadour, an anarchistic poet whose life was intertwined with the history of the state. Yebi despised materialism and focused on the love of fellow man and country, and all out war on injustice. In a thunderous voice he shook all those around him who wanted, or didn’t want, to listen to his cries. His booklets of poetry, he himself printed and sold on the street, and with the money he would invite his friends to drink. His life was also intertwined with the lives of central figures in Israeli culture, who, together, were partners in the creation of the Tel-Aviv culture, the Tel Aviv bohemian life. Even so, Yebi blurred all trace of his personal life, and even his closest friends didn’t know where he lived. The film attempts to throw light on one of the most colorful, fascinating and mysterious personalities that lived and worked in Tel Aviv.