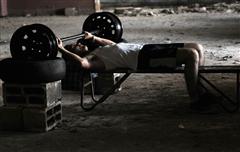 In the 1990’s a million former USSR Jews arrived in Israel. The immigrants were despised by the local population who feared their ‘invasion’. While many embraced the Israeli lifestyle, others chose to live in self-made Russian ghettos. These ghettos were a fertile ground for the creation of self-hating Jewish skinheads. ‘White Panther’ is the story of Alex, a young Russian immigrant who joins a skinheads’ gang, led by his older brother. An unexpected meeting with David, a religious Moroccan Jew, gives Alex a chance to pursue his longtime dream of becoming a boxer like his father. Alex finds himself torn between his two father figures – his violent older brother and his new Jewish trainer, only to find out the truth about those he so admires.