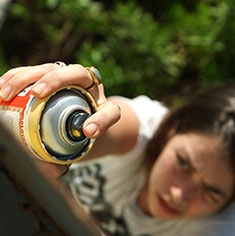 We Own the Streets

We Own the Streets follows eight graffiti artists who come from different social backgrounds in Israel. This film takes place on the streets; it looks at the industry that grew around underground graffiti art – the tourist tours of graffiti hot spots, graffiti lessons in middle school and the insertion of graffiti into the mainstream art world. The film follows the artists in real time and attempts to decipher one of the most relevant art movements of the 21st century.