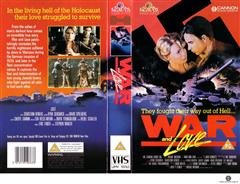 From the ashes of man’s darkest hour comes an incredible true story. War and Love painstakingly recreates the horrific nightmare suffered by Jews in Warsaw during the German invasion of 1939, and later in the Nazi concentration camps. It captures the fear and determination of two young Jewish lovers who fight against all odds to find each other.