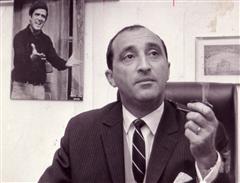 Waiting for Godik, a musical documentary, tells the story of the rise and fall of the Israeli King of Musicals, legendary producer and impresario Giora Godik. The tragic story of the man, who touched the dream and crashed, is also the story of an unforgettable era and the tale of the local version of the musical genre. Godik, one of the prominent symbols of Israel’s happy 60s, endeavored, in his way, to bring the American dream to Tel Aviv. However, the dream was shattered when Godik skyrocketed to the top and plummeted to the lowest depths. Godik fled unexpectedly to Germany, on the eve of his last premiere. Utterly destitute, he sold hot-dogs for a living, at the central railway station in Frankfurt. He believed he would soon resume his position as King of Musicals. But Godik stayed far away from the theater, never to return. Combined with archival segments and songs from Godik’s musicals, the film focuses the spotlight on the corner that remained in the darkness, Godik’s family. His widow and two children relive the moments of despair on the eve of his sudden flight from the country. The film glimpses into the gap between glittering lights and a life in the shadows. It brings back to life the story of a man who believed that life was a musical.