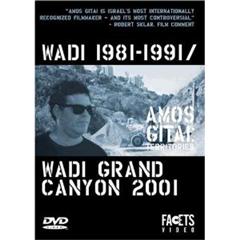 Wadi is a valley located east of Haifa. A former stone quarry, it is a sort of enclave where Eastern European immigrants, survivors of the camps, live in a state of fragile coexistence with Arabs who have also been expelled from their homes. In 1981, Amos Gitai went there to film the intimate story of Yussuf and Isha, Iso and Salo, Miriam and Skander, an Arab family, a Jewish family and a mixed couples, together in this remote and isolated place. By choosing a particular location and making a detailed study of it, by examining the complex relationships that make up life in society, he turns the valley into a specific place, the symbol of a possible coexistence. This film is the first part of a trilogy about the site (Wadi 1981, Wadi Ten Years After 1981-1991, Wadi Grand Canyon 2001).