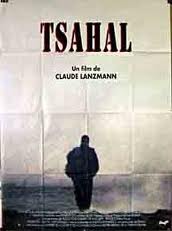 Tsahal is a film about the Israeli army based on interviews with young soldiers and which created much controversy, provoking the right-wing activists to throw tear gas bombs during its showing in Paris.

As a document on the terror of war, it reveals the fears of the soldiers, the violence they are forced to participate in, and the basic human instincts of survival they have to rely on when confronted with death.