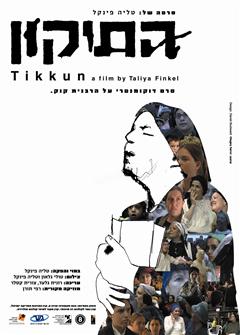 Tikkun portrays the phenomenon of the Rabbanit (the wife of a Rabbi) of Tiberius, Leah Kook; an orthodox leader supported and followed by many Israeli women. This film is a vivid picture of the routines and customs of life in an ultra-orthodox household and introduces a very charismatic, yet highly controversial main character: Rabbanit Kook, a staunch believer in a prophecy that the world refuses to hear. Such an extrovert enthusiast about her belief, the filmmaker documented her intensively for two entire years.

As the maker of the film got drawn in this world and became accepted as a member of the house herself, she could explore the inner truths of the story and get behind the scene. By watching the Rabanit at very close range, one gets an insight into the controversial attitude of the Israeli society towards Lea Kook: is she genuine or a fraud?