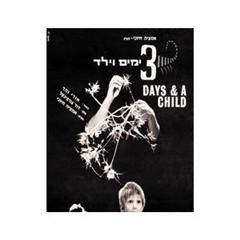 Three Days and A Child

Old and new relationships are explored in the film based on the classic story by A.B. Yehoshua. A young man returns to his kibbutz after army service, to find that the woman with whom he is in love, has married someone else. Then, one day, his former girlfriend asks him to look after her son for three days. Oded Kotler received the Best Actor Award at the Cannes Film Festival for his lead role. Also, with Illy Gorlitzky and Shuy Osherov.