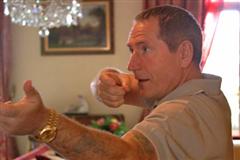 Following the stories of three mafiosi-cum-businessmen, Thieves By Law paints a fascinating tableau of men that would make Tony Soprano cringe. Most intriguing, though, are their personal histories interwoven with the evolution of the Russian Mafia itself. Beginning in Stalin’s gulags and slowly transforming into an international organization, the mafia and Code of Thieves have always directly correlated to the political struggles of the Soviet Union-reflecting society back to the government like a funhouse mirror.