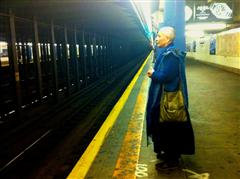 The Way Back- Rivka Zohar returns to NY

Rivka Zohar’s life has been determined by three powerful forces: the first is an exceptional singing voice that fixed her place in the Israeli pantheon at the young age of 20; the second is drug addiction, to which she escaped during many years on the meanest streets in New York; and the third is Shlomo Kalo – a spiritual teacher, to whom she has been married for 20 years. Now, after 25 years, she returns to New York, where a concert awaits her, and perhaps also the daughter who was 11 when they last parted, never to meet again. A retrospective portrait of Rivka Zohar just before she is about to reunite with the daughter she has not seen for years.