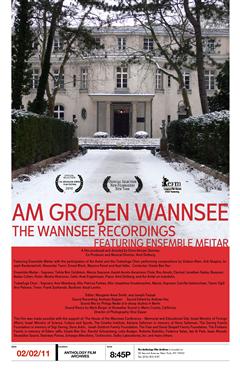 On January 20th, 2009, a group of young Israeli and German musicians led by Ensemble Meitar, a Chamber Ensemble from Israel, performed the works of contemporary Israeli and Jewish composers, along with an unfinished composition by Gideon Klein, a composer who was killed during the Holocaust. This unique program was performed and filmed at the House of the Wannsee Conference and Educational Site. The film takes its name from the Wannsee Conference, a meeting of senior officials of the Nazi German regime, held in the Berlin suburb of Wannsee on January 20th, 1942. The purpose of the conference was to inform the heads of German Government Departments of the ‘Final solution to the Jewish question’, to obtain their agreement and to subordinate their activities to the official German State policy. In essence, this was the meeting at which the Final Solution was ratified and put into motion as state policy. An important aspect of this project is its range, and the diversity of its individual voices. From Gideon Klein, who explored modernism, to Arie Shapira, an avant-garde Israeli composer controversial in his own country, to a group of younger Israeli composers who meet these new musical paradigms on their own terms, the Wannsee Recordings, are above all a concrete expression of the diversity of Jewish life, and the richness of contemporary music today. One would not expect to find the music of Arie Shapira, and Ernest Bloch, or Josef Bardanashvili and Gideon Klein on the same program. Our choice in selecting these pieces, whose diversity may seem extreme, was not to create a program which only explored the edges, but to create a space, a larger space because of the distance which exists between these various compositions, in which the individuality of each composition would have the necessary room it needs to take its unique form. The choice of performing these pieces and making this film at the site of the Wannsee conference, was not intended as a sort of revenge, but as an expression by these musicians, and through the music they selected and performed, to be present in this world and articulate their contribution to it, to not be absent from history. The Wannsee Recordings were filmed with the generous help and cooperation of the House of the Wannsee Conference Memorial and Educational Site, The Goethe Institute, and the Israel Ministry of Foreign Affairs (along the support of many others). The Wannsee Recordings were performed and filmed on the same day (January 20th, 2009), took place in the same room, and in its edited form will be the same duration (approximately 80 minutes) as the infamous Wannsee conference. This is the first time that a project like this has been allowed to be filmed inside the Wannsee villa conference room.