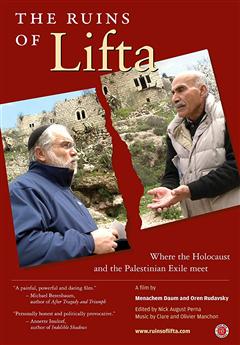 The Ruins of Lifta

Lifta, on the outskirts of Jerusalem, is the only Arab village abandoned in the 1948 Arab-Israeli war that has not been completely destroyed or repopulated by Jews. Its ruins are now threatened by an Israeli development plan that would convert it into an upscale Jewish neighborhood.

Filmmaker Menachem Daum – an Orthodox Jew from Brooklyn – sets out to discover the story behind the headlines. He meets Yacoub, a Palestinian who was expelled from Lifta and now leads the struggle to save the haunting ruins of his village from Israeli plans to build luxury villas on the site. Learning that Lifta was once a place where Jews and Arabs got along, Menachem joins Yacoub’s campaign in the hopes that Lifta can serve as a place of reflection and reconciliation. This leads to a climactic encounter between a Holocaust survivor and a Nakba refugee amidst the ruins of Lifta.