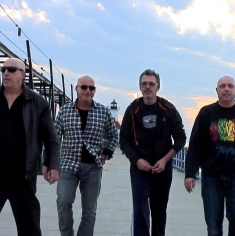 The Clique was an Israeli punk/new wave band in the 1980’s. The songs carried anti-social and political messages and after two albums, masterpieces of Israeli counter-culture, The Clique broke up. Thirty years later, at the age of 57, the musicians reunites for a final journey, determined to achieve one more thing together before it’s too late. Dani Dothan, co-director of the film and lead vocalist of The Clique, wants to return to the stage and the protest he has abandoned in the 80’s. The film follows the rebirth of The Clique while the past keeps pushing in, wreaking havoc and causing despair. The Last Click is a film about friendship, music, aging and the story of those young rebels who have destroyed their world and now hope for a second chance.