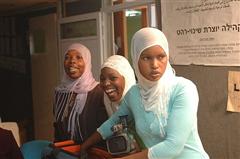 About two years ago, Filmmaker Uri Rosenwaks, came to Rahat, a Bedouin town down in Israel’s Negev Dessert, to teach a group of Black Bedouin women a class in filmmaking. Rahat is by no means an ordinary place. It is afflicted with pessimism, unemployment, poverty and violence. It is partially populated by the Black Bedouins who were brought to the Negev, and the Middle East at large, as slaves. Kidnapped in Africa by Arab slave traders, they were auctioned-off in Saudi Arabia, Egypt and Zanzibar. Until 50 years ago, the Black Bedouins were enslaved by the White ones. When the Director first started working with the group, he had no knowledge of it. The women never mentioned the issue he found increasingly intriguing. Only after about 18 months of working and making short films together, did he work up the nerve to suggest that they will make a film telling the history of the Black Bedouins. Suddenly, a small and modest course in filmmaking became a place in which a great taboo comes into the open. The women still suffering discrimination to this day unveil a story which few have spoken of.