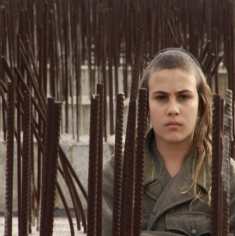 A journey through Kabbalah, heroin, chaos & redemption. For ten years, Yannai has filmed his own and his Mother’s lives changing dramatically. His Mother, Faiga, is a holocaust survivor, who at 45, married the Rabbi Ashlag when he was 85. He taught her the secrets of Kabbalah and then passed away. Since then the Rebbetizin Faiga tries to save the world from self annihilation by teaching Kabbalah. Yet every birthday, she herself has to withhold from her desire to disintegrate into threads of chaos, and choose life instead. She wanted Yannai to be the Messiah, he chose, at the age of 14, to run away to the streets of Tel Aviv, where he became a heroin addict. Finally, he finds himself living in Jerusalem, telling his life’s story through film. This is a film that explores and strives for the concept of home.