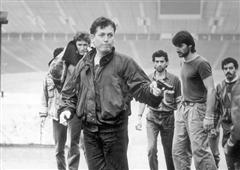 A powerful and provocative film that confronts the Israeli-Palestinian struggle. Draws heavily from the “spy thriller” genre. This is a story of a relationship between three men: Amin, a Palestinian nationalist; Joseph, an Israeli peacenik; and Colonel Shalit, a right-wing Israeli intelligence officer. The film unfolds in two interwoven parts: first, in Berlin, and then as a flashback in Jerusalem where Shalit turns a bungled Palestinian attempt to kill a United States diplomat into a successful Mossad assassination of a dovish Israeli Foreign Minister, and then pins it on the Palestinians. In Berlin, the characters try to deal with the consequences of their moral ambiguity, deceit, and private intrigues. It is a cat-and-mouse game, where everyone’s loyalties come into question. A chilling and ambitious drama which breaks every stereotype and effectively places responsibility on all of the players.