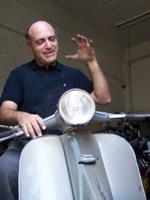 Socrates on a Scooter

A seemingly simple story: a young man goes out to war and doesn’t return.

Many years later his son, now an adult, decides to make an album or perhaps a film, commemorating his father. He soon discovers that the young man who went to war, Yaakov Meir, was a revolutionary and a philosopher. His students called him Socrates. Riding around on a Lambretta scooter, Yaakov left the impression of being a charismatic teacher. Slowly it becomes clear to the son that the details he knew about the circumstances of his father’s death were far from the truth. This is a personal detective movie revealing fascinating characters: both the father and his son – who is the real hero of the film.