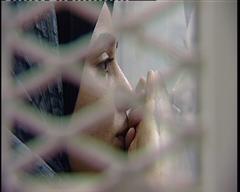 March 21st, 2002, a crisp bright winter morning. It is mother’s day. Kahira makes breakfast for her four small children and hugs them goodbye as they leave for school. Only two hours later, Kahira passes through a military road block, she is with a man and another young woman. They enter a waiting car and make their way towards Jerusalem. When they reach the city, Kahira and the other woman mingle in the crowds, buy flowers and examine the adjacent streets…. An hour later a deafening explosion rips through the air. King George street in the city center is in chaos. Crowds are screaming, ambulances and police cars are whaling in the distance. Kahira stands covered in blood and pieces of flesh. Innocent bystanders help her clean up and offer to help….Kahira returns to her village. It is night. Her children are asleep and the house is silent. At 3 AM there is a knock on the door. Israeli soldiers have come to arrest her. 3 people were killed in the terrorist attach, and 80 were wounded. Kahira is sentenced to 3 life terms in prison. At the end of 2005 there were 110 women serving time as “security prisoners” in Israeli prisons. 10 of them were convicted of trying to carry out a terrorist attack. This is a substantial increase compared with five years earlier, when there were barely 5 female “security prisoners”. All these women were convicted of either carrying out, or assisting others in carrying out terrorist attacks in Israel. Most female suicide bombers (or in their words “freedom fighters”) have been involved in some form of “scandal” in their personal lives. Their decision to participate in acts of terror was often fueled by romantic encounters, a tainted reputation as a result of extra-marital relations or vicious rumors of infidelity. In order to restore their family honor and their own reputations, these women found refuge in acts of terror, in a final attempt to clear their names, and bring pride to their families. In “Brides of Allah”, I as a Jewish/Israeli woman, will journey to the reality of the woman on the other side. I will embark on a search for the compassion and understanding that we associate with the nature of women, the same compassion which drove me to embark on this film. I wish to convey to the viewer my attempt to understand how a woman, a mother, is capable of committing such a horrific act. How can she take part in the death of children and babies? How can she leave her own children motherless? What is that motivating power, which is more compelling then the natural maternal desire to protect her children at all cost?