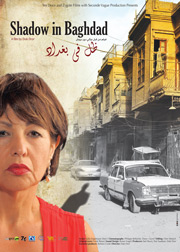 SHADOW IN BAGHDAD tells the story of Linda Abdul Aziz, who escaped the upheaval of Iraq in the early 1970’s to Israel, and her father, who disappeared shortly thereafter to an unknown fate. The film follows Linda as an unexpected connection with a young Iraqi journalist sets her back on the path towards Baghdad and the truth behind her father’s disappearance. As mutual suspicion converts to trust, the two begin to revisit a painful past, drawing closer and closer to the tragic story of Linda’s father’s ending. What they ultimately uncover is not only the fate of Linda’s father but that of the once thriving Iraqi Jewish community whose over 2,000 years’ history came to an abrupt end in the 1970’s. At once a story of tragedy and redemption, Shadow in Baghdad tells of an important chapter in the turbulent history of the Middle East as it points to a distinct hope for the future as well.