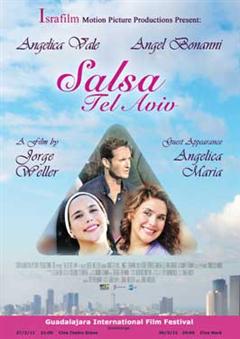 Salsa in Tel Aviv is a romantic comedy. Vicky is a talented salsa dancer who arrives in Israel in order to work and send money to her mother and son overseas. Her son’s father, Beto, is living in Israel illegally, teaching salsa and cleaning homes. Following Beto’s advice, Vicky disguises herself as a nun in order to enter Israel more easily. The story begins on the plane to Israel. In the seat next to Vicky is Yoni, a good-looking Israeli biologist. Yoni and Vicky develop a “forbidden” attraction-between a “nun” and a man engaged to be married…. In Israel, Vicky is finally reunited with Beto, who still loves her, and she becomes an illegal foreign worker. One day, the Immigration Police show up at Vicky’s home. Beto is arrested. Luckily, Vicky is able to get away. She seeks refuge at Yoni’s home. Having Vicky around turns Yoni’s life upside down. He is about to be married to Dafna. He does everything he can to keep Dafna unaware of Vicky, which leads to some very amusing situations. Despite all his efforts, Dafna finds out that Vicky is living in Yoni’s home. She is convinced that Vicky is Yoni’s lover, and decides to do everything in order to have her deported, and out of her fiancE?’s life.