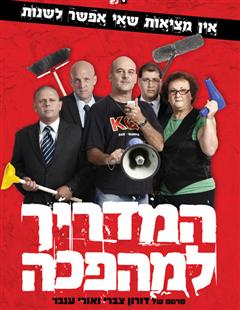 Doron Tsabari and Uri Inbar’s ‘Revolution 101′ is a terrific rabble-rousing film, documenting their fight against the IPB (Israeli Public Broadcasting – Rashut Ha’Shidur). It is impossible to live here and not have heard at least bits and pieces of the IPB’s troubles in the past decade. Corruption, ineptitude, improper hiring, fiscal mismanagement- every few months, one noticed a new story, particularly during the direct government intervention during the reign of Yosef Barel, the former director of the organization. Director Tsabari, with the assistance of his producer and friend Inbar, has been intimately involved in attempting to correct these outrages.