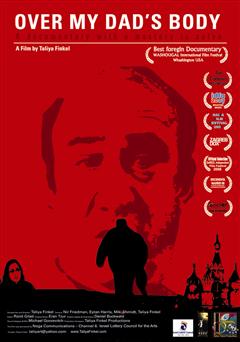 Over My Dad’s Body

This documentary thriller follows filmmaker Taliya’s story. When Taliya was young, she never knew for sure whether her uncle was a KGB agent in disguise or a true member of the family. Her father claimed that his brother had been murdered in a Ukrainian prison and substituted by an imposter from the KGB, forced on the family by the old soviet regime. Her father presented his claims in a way that made his family believe this unlikely story. After the tragic death of the father, the mystery surrounding his stories continued to grow.

Five years after his death, filmmaker Taliya Finkel goes on a fascinating journey in order to unfold the mystery around her departed father. Guided by a private investigator, she travels from Israel to the Ukraine and back in a desperate quest to find proof of her father’s story. During the voyage, Taliya investigates the thin line that separates imagination and reality, sanity and madness.