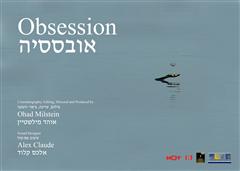 Obsession is a documentary film which examines the clear concept of obsessive sensation. The film digs a subterranean-inner consciousness tunnel via the different kinds of obsessions; obsession with love, obsession with death, food, knowledge, money, sex, control, exposure, cleaning, fame, etc. The film sketches a line connecting obsession, to the spirit of the time and to the modern lifestyle, while considering the determination that obsession is the most common “disease” of the 21st century. The intense process, through which the film takes the viewer, examines how is obsession created, what feeds the obsession, how does obsession serves the person, and how it is motivated by an endless aspiration of the person to achieve salvation, a state of euphoria.