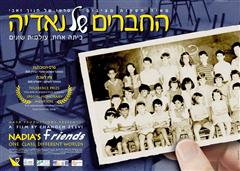 Nadia’s Friends is a documentary which follows filmmaker Chanoch Ze’evi as he travels through Israel exploring how Zionism has evolved since he was a child. Ze’evi attended elementary school in the religious Zionist village of Kfar Haroeh, where his classmates represented a cross-section of Israeli society. They included Jews of every background: Ashkenazi, Sephardi, religious, secular, and even one Arab girl – Nadia, for whom the film is named. Now, more than twenty-five years after graduating from elementary school, Ze’evi has organized a class reunion that brings together men and women whose lives have diverged from the original journey begun in Kfar Haroeh.