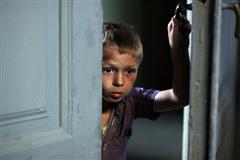 Poland, the mid 1960s. A struggling family in an impoverished neighborhood. The mother, separated from her Polish husband, spends most of her time at work in order to provide the basic needs for her twelve and fifteen-year-old sons. The boys have joined a gang with strong neo-Nazi orientations. One day, the gang enters a Jewish neighborhood, vandalizing the premises and stabbing some youngsters, until they are arrested by the police. Due to this incident, their mother decides to tell them the truth – she is a Jew who survived the Holocaust and raised them in the Catholic faith. She informs them that they are going to immigrate to Australia, while in truth, they are moving to Israel.

The film explores the struggles for self-identity as immigrants, while trying to build a new life in a foreign land.