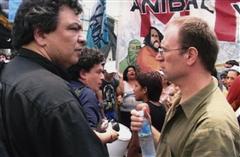 In the spring of 1945, Polish Jewish Holocaust survivor Lena Kuchlar a young teacher and physiologist, discovered dozens of orphaned Jewish children (ages 3-15) holed up the Jewish Committee Center in Krakow. Inspired by the teachings of Janusz Korczak and employing progressive psychiatric methods, she slowly brought these damaged children back to life. The orphanage she established in Zakopane, Poland, fell pray to antisemitic attacks and in 1949 she smuggled the children out of Poland, first to France and eventually to Israel, to Schiller Kibbutz. My 100 Children is based on Kuchlar’s best selling, watershed 1959 autobiography. The book was translated into fourteen languages and Kuchlar became a minor celebrity in Israel, appearing on television and throughout the country.

My 100 Children includes moving interviews with Kuchlar’s own daughter and many of Kuchlar’s “children” who recall the dramatic events.