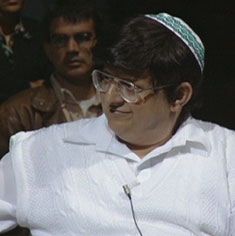 Yahud 1994. A minor construction dispute on Passover Eve turns into a nation-wide drama. Rabbi Uzi Meshulam, a charismatic Yemenite leader, barricades himself in his house with his armed followers, demanding a commission of inquiry for the disappearance of thousands of Yemenite children during the first years of the State of Israel. In the frenzy, the Yemenite children’s affair dominates the public agenda, revealing wounds that have never healed.