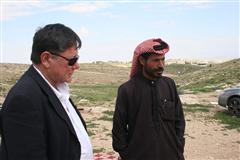 Land for the Nomads

Shlomo Lecker is an Israeli lawyer who defies all steriotypes. He is a Jew who gights for the Bedouins. In the Judean desert east of Jerusalem up to the Dead Sea, some 27,000 Bedouins live in roadside shacks. Since the 1970s, after Israel occupied the West Bank, Jewish settlements mushroomed up all along the desert and thereby limiting the Bedouins’ nomadic way of life. The steady expansion of Jewish settlements endangers the livelihood and the very existance of this community. This film follows Lecker’s personal relationship with his clients – the lone Israeli who claims that he has a Bedouin soul.