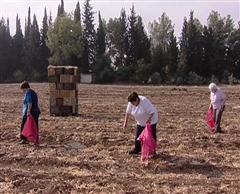 Kibbutz Hulata is located in the Upper Galilee. For 5 years Racheli Schwartz has been following the collapse and disintegration of her home. Most kibbutzim in Israel are in a vicious syndrome of economic collapse as well as ideological bankruptcy. This has caused the destruction of the very essential assets of kibbutz’s life: the dining room, the heart of the Kibbutz, where members met for meals, the communal laundry and the music room were all closed. Agriculture, the source of pride to a people returning to their land, is no longer profitable; orchards are being uprooted and the dairy is being dismantled. People become suspicious, isolated and begin to build fences around their homes. Yehuda is found hanged in the citrus plantation where he used to work. The dismantling of the Kibbutz had rendered him unemployed with no skills for other work. The film follows a number of members, each deeply influenced by the imminent death of the Kibbutz.