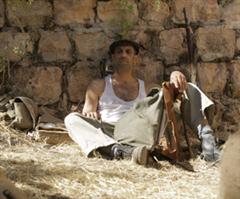 1946. A pair of Auschwitz survivors arrives in Jerusalem. Bruno is a doctor and Sarah a pianist. They are trying to rehabilitate their lives and love in a city under siege during the War of Independence. Upon their arrival, a rumor spreads that Bruno was a sadistic bloc head (“Kapo”) in Auschwitz who abused prisoners and even killed a few. Bruno struggles for his life, his reputation and the principles according to which he acted. Doubt begins to nibble away at Sarah’s heart, while she tries her best to believe in him and support him. In a different, minimalist cinematic language, the survivors reveal their struggle for humanity in the death camps and go through a soul search that is still relevant today.”Kapo in Jerusalem” is a journey into the past that Sarah, Bruno and those around them undergo, a journey through the gradually fading memory into the human and the monstrous, the compassionate and the cruel, the intimate and the ideological, in Auschwitz and after it.