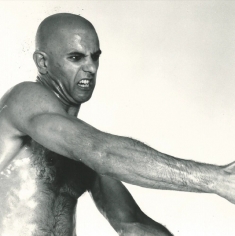 If life is a play and all the world’s a stage, actor and activist Juliano Mer-Khamis epitomized the famous quote to its bitter end. On 4 April 2011, Mer-Khamis was assassinated by a masked gunman in the city of Jenin, where he’d established the Freedom Theatre. The shooter was never caught. “Juliano died as he’d lived, the stuff of Greek tragedies,” mourned filmmaker Avi Nesher.