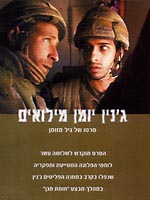 Jenin Diary – The Inside Story

The documentary Jenin Yoman Miluim (Jenin Diary) chronicles what happens to a group of Israeli soldiers after a Palestinian attack that results in the death of 13 servicemen. The director, a member of the group that came under attack, interviews fellow soldiers as well as superior officers who question why reservists were stationed at the city rather than better trained soldiers. The interviews capture the churning emotions of the men who have seen horror and carnage. Jenin Diary was screened at the 2003 Israel Film Festival.