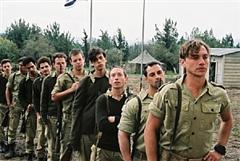 The early 1950s, a few years after the War of Independence and the establishment of the State of Israel. Immigration is at its peak, transit camps are scattered throughout the country, security is unstable. This is the story of one platoon at Training Base 4, a three-month boot camp for non-combatants. The platoon consists of soldiers from cooperative settlements, kibbutzim, towns, Ashkenazim, new immigrants from North Africa and Europe, holocaust survivors, secular and religious men. All the platoon members suffer from afflictions, are physically unfit, or mentally disabled. They find themselves on the extreme margins of society. The film deals with people at the bottom of the social ladder who dream of ascending to the top. Common precepts such as “melting pot,” “team spirit,” and “one for all and all for one,” remain unfulfilled. This is a battle for the individual’s survival, a war for status, identity, and independence. A battle to attain the loftiest dreams, a war waged by individuals against their destiny.