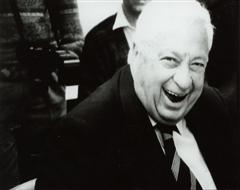 How I Learned to Overcome My Fear and Love Arik Sharon

With the 1996 election campaign approaching, director Avi Mograbi set out to make a film about an infamous and admired political figure, former Israeli cabinet minister and legendary army general, Arik Sharon. To the filmmaker’s surprise, he finds Sharon extremely likeable. In the course of the campaign, Mograbi sets aside his leftist political beliefs and gets surprisingly close to Sharon. This ironic fictitious documentary tells the story of the film’s making, which turns into a domestic melodrama threaded with nightmares about Sharon and arguments with his wife. The real story is of the impossible close encounter between left and right in present-day Israel.