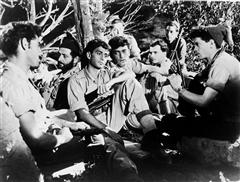 This film was the first ever to be shot in Israel and deals with the outbreak of hostility and war that occurred during the Israeli War for independence. The night before a cease-fire in the Arab-Israeli conflict to be imposed by the United Nations, a group of volunteer soldiers set out to hold their position on Hill 24 to claim it as Israel’s territory and recount stories of their very different lives along the way.