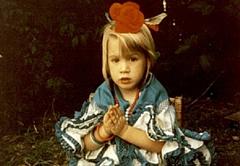 How does a white boy with Alabama roots become a Flamenco guitarist in Andalucian boots, and what happens along the way? The film tells the story of David Serva, a celebrated flamenco dancer,  through his five women and five children — one of whom is the director. After all, who knows the-man-who-came-and-saw-and-conquered (and conquered and conquered), “strumming their pain with his fingers, killing them softly with his song,” better than they? A tale about self-invention and the pursuit-of-happiness (no matter the cost to others), Gypsy Davy is a personal and political portrait of a man, a family, a generation.