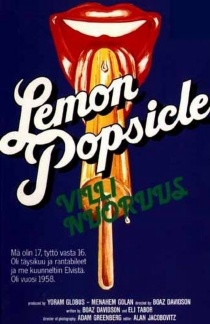 Going All The Way

Bentzi, Momo, and Yuda’leh are three teenage boys growing up in 1950’s Israel, which is not much different from 1950’s America if you believe what you see in the film. Of course they are obsessed with one thing – sex. Bentzi is interested in the beautiful Nili, but she prefers his friend Momo. Meanwhile, while Bentzi is working delivering ice to people he comes across a voluptous nympho. For some reason he leaves his job and gets his friends, who are promptly invited inside and divested of their virginity in an explicit softcore sex scene. Momo goes first, then the obese Yuda’leh. Before Bentzi can have his turn the nypho’s sailor boyfriend suddenly returns from the sea and chases the boys away, Yuda’leh being forced to run away naked. The boys next visit a prostitute and are serviced by her in turn, the experience causing Bentzi to vomit. With all this experience under his belt Momo seduces Nili and impregnates her. He disowns her when she makes this known to him, leaving it to Bentzi to borrow money and sell his bicycle to get money for an abortion.