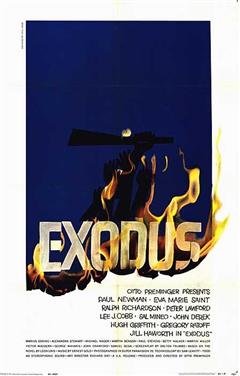 Based on the 1958 novel written by Leon Uris, Exodus has been characterized as a “Zionist epic.” The film tells the story of the founding of the state of Israel. The action begins on a ship filled with Jewish immigrants bound for Israel who are being blocked from entering Israel from Cyprus by the British, leading to negotiations. The second part of the film is about the situation in Israel and independence is declared and most of their neighbors attack them.