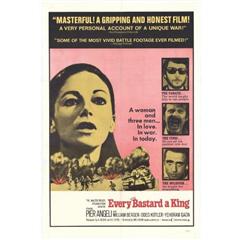 Every Bastard a King

This Israeli-made feature was originally titled Kol Mamzer Melech. Dramatizing an actual event that occurred during the Six-Day War of 1967, the film top-bills Italian actress Pier Angeli, but the central character is a pilot named Ralphi Cohen (played by Oded Kotler). Hoping to bring peace to his country, Cohen takes it upon himself to fly his plane towards Egypt, there to hopefully commiserate with Abdel Nasser. Shot down en route, Cohen finds himself halfway between the Egyptian and Israeli armies; he’d like to get home, but he’d also like to retain the use of his life.