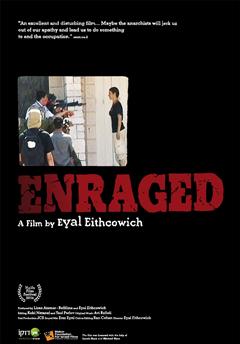 A group of Jewish-Israeli activists refuse to sit back while the occupation continues. They bring food into Palestinian villages under curfew, tear down parts of the separation barrier, and serve as human shields for Palestinian demonstrators. In Israel they are ostracized; in Palestine they endure a similar fate to that of the Palestinians. They are beaten, sprayed with tear-gas, and shot at with rubber-coated bullets. One such bullet hits one of the film’s main characters, a 16 year old boy from Tel Aviv, in the head, permanently impairing his eyesight. The heroes of Enraged jolt viewers out of their passivity, forcing them to ask: what can I do to end the occupation?

Enraged, directed by Eyal Eithcowich, premiered at the Haifa International Film Festival, was broadcast many times on Israeli TV, and was screened in festivals and other venues in the U.S. and Europe.